In the final days of WWII, SS officers massacred 61 Jewish prisoners near the Bavarian town of Surberg. Today, a twenty-foot tall cross towers over their memorial, and their graves are marked by small wooden crosses. While a more Jewish memorial was planned, it met with resistance from local residents who insisted that a cross was the fitting symbol for a grave. Today the small model for the proposed monument has been added, along with the Star of David at the base of the cross, but the crosses remain. I visited this cemetery the day after the sword dance in Traunstein and found this dissonance to be uncomfortable. Here is the story:

It is early May of 1945, and the Third Reich has all but collapsed. Poland has been recaptured in January by Russian troops, who discover the death camps of Auschwitz and Birkenau and the remains of over 1 million victims. Hitler’s Ardennes Offensive has failed with the Battle of the Bulge, and the Germans are now waging a purely defensive war that all know will be lost. As the Allies approach the concentration camps of Buchenwald, SS officers force prisoners on a death march, fleeing the camp.

Prisoners die along the way as they are forced south.  On reaching Surberg, SS guards get word of American forces approaching from the south. Fearing that the atrocities that took place in the camp will be revealed, they gun down 61 (While most sources cite this number, a plaque in the cemetery reads 66) mostly Jewish prisoners in the woods, fling down their weapons and flee as civilians. Five days later, Hitler is dead and the Allies celebrate VE day.

Buchenwald, where the victims started, had been liberated several weeks before.

Picture of Buchenwald at liberation: The motto translates "To each, his own." While usually we interpret this as "each person can do what they want," the SS interpreted it as "To each person (who is of the master race) should go what is owed to them."

There is a large chunk of history that I don’t know here, and I don’t want to make any statements or claims that are incorrect. This is what I have been told. The victims were moved from the woods and buried in a small circular plot of land by the village with a wall around it. 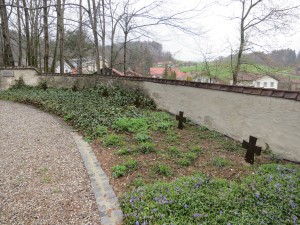 Small crosses marked the graves and a large cross is erected in the center of the circle on a cement platform. At some point it was pointed out that it didn’t make sense that Jewish victims were being memorialized by the symbol of a different religion. A Jewish organization (I believe in Salzburg, Austria) proposed to take down the cross and erect a more fitting memorial. The community refused, saying that the cross wasn’t a Christian symbol, simply one of death and remembrance. A cross was the proper symbol for a graveyard and they didn’t want it to be changed. There was a fight over this issue, but those who wanted the cross won out, and it has stayed. The model for the proposed monument was added at the side of the path, and two Jewish stars were added to the base of the cross at opposing sides. 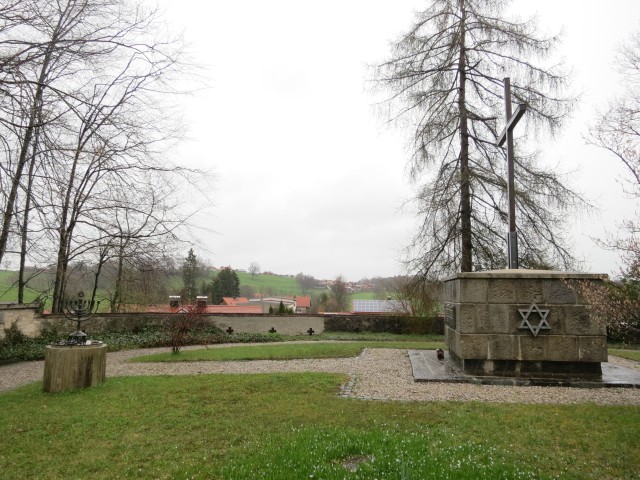 The victims remain buried under Christian crosses around the perimeter of the wall. The model, a Hanukkah lamp of iron surrounded by the figures of humans, is adorned with a few pebbles, a Jewish tradition of remembrance.

While talking to the local who showed me the monument, he expressed his sadness that the cross had been allowed to remain, “It is impossible to explain to a visitor why these Jews are being represented by a cross. It doesn’t make sense.” To me this felt like a further violation of these victims. None of these people would have said that a cross is a general symbol for death. It strikes me similarly to the Mormon Church baptizing holocaust victims without consent. Part of the problem is that there are very few Jews in the area to argue this point, as Salzburg (the nearest Jewish community) is over the border. The people of the town have to take care of the monument, but should this give them the right to erect a symbol contrary to the beliefs of the people murdered?

I don’t believe so.

I don’t know what the aim of this article is. I don’t know enough about the local situation to feel I can pass judgement. I don’t know if the Jewish community in Salzburg has accepted this since the initial fight. I do know that it feels uncomfortable. It doesn’t seem like the right thing. And maybe it should change.